While world markets are looking very positive as Friday approaches, there are major gains in the steel industry and major losses with one of the biggest spirit producer in the world.

While world markets are looking very positive as Friday approaches, there are major gains in the steel industry and major losses with one of the biggest spirit producer in the world.

Russia’s attempt to save ruble – will it succeed?

Since 2014 Russia’s economy has weakened by 50 percent. Ruble lost twice as much as it was worth, jumping from 30 rubles per dollar, to 60-65 rubles per dollar. It is natural that Russian officials would try and save the economy by boosting it with various means. For example, Russia is waiting to be the host of football world cup this summer among other things. But the world is not so sure that Russian intentions are as pure as they would want to seem.

It is worth to remember that currently Russia is under international sanctions for the invasion on the territory of the neighboring country. Not a very friendly move. But the main task of Russian government is to safe economy and make ruble strong once again. That is why Russian side might be preparing to the meeting of their Foreign Minister Sergei Lavrov with his American colleague Mike Pompeo. Although Russian and American relationship have not been too friendly lately with Russian mass media always threatening and black mouthing the USA there is still hope for reconciliation.

If the meeting takes place there surely will be talks about lifting at least some of the sanctions off of Russia. And as ruble displayed earlier, even talks can get it to move. We remember the crash that was taken by the Moscow exchange after the information of the new sanctions package emerged a couple of months back. Of course, there are hopes that in case the meeting between Lavrov and Pompeo takes place ruble will become a bit stronger and safe to trade in once again.

Gold might be weak but there are other assets. 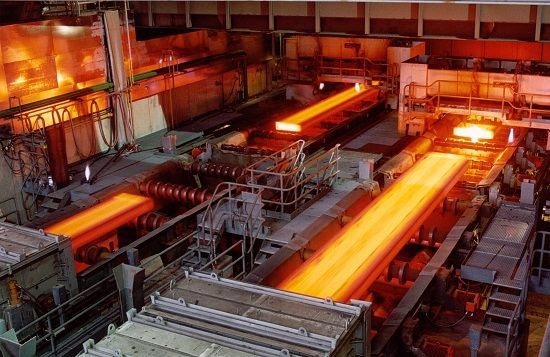 Yes. Gold hasn’t been on a strong performance in weeks now. The most valuable metal on Earth has been in the red zone for a long time now. But that doesn’t means that there are no metal assets to trade with. Look at steel. Yes, admittedly the industry has been hit pretty hard with the information on the US tariffs. But now when there are a lot of things on Trump’s plate and tariffs are pushed away from the spotlight the industry lives again.

Right now steel futures in China went up to the highest point in almost three months. China is the largest steel producer in the world and various moves in the industry are majorly due to the changes inside China. Shanghai Futures on steel have gained 2.5 percent. That is the best performance for the asset in 5 weeks. Right now metric ton of steel costs $605. March was marked by the worst numbers for the metal in nearly a year. But since then the price advanced by 15 percent. It is quite expected that in the nearest week the asset will only continue to gain as all of the attention is drawn away from the industry by Trump-Un meeting.

China is also changing some of the rules inside the country and as it was already mentioned they are accounted for the price jump. Right now China is pushing national producers to clean up the production process and make it more environmentally friendly. The government is going to look after the process themselves as the regular checkups are planned. All of that might indicate that China is putting a lot of hope on the industry. We mean, why improve something that is not going to bring a lot of profits, right? That means that in the nearest future Chinese steel industry is practically sure in gaining more investors and trades.

While opening a new bottle of whiskey we never think that there is a whole industry behind the liquid in the bottle. But there is. And American segment of the market will most surely take a serious hit now. All because of the Trump’s new tariffs imposed in the biggest and nearest partners of the United States.

Producer of Jack Daniels whiskey Brown-Forman Corporation has released a statement saying that there are hard times ahead for the company after Mexico announced a 25 percent tax for import of American bourbon. After the announcement was made Brown-Forman’s shares have fallen tp the lowest point since February 2018, losing more than 6 percent to $52.47 per share. Admittedly their shares have seen worse times but such rapid reaction was surely connected to the Mexican decision.

But it seems that there are more troubles ahead for the company with pending response from the EU. Right now it is hard to say even for the most experienced what will the stock and trade volume of Brown-Forman loos by the end of the year but right now the situation is not looking good. As the most sad thing is that all of the tariff wars will most surely hit not the big corporations but an average buyers. So in the nearest future it may become harder not only to trade with the unstable shares of Jack Daniels producer, but also to enjoy reasonably price bottle of their finest bourbon.